In the fall of 2017, MissingWordSolutions.com had the opportunity to work with 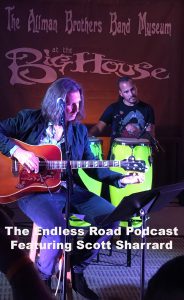 Scott Sharrard and his management team. Scott served as the lead guitarist and musical director for the Gregg Allman Band. Just prior to being nominated for two 2018 Grammy Awards for Gregg’s final studio album, Southern Blood, Scott made a southern swing with his own Brickyard Band. After playing a show in North Carolina, Scott and the Brickyard Band traveled to Georgia to play a show in Macon, which served as home base for the Allman Brothers Band. Scott then closed out the Southeastern run by re-uniting the Gregg Allman Band and playing the Southern Blood album in its entirety as part of the annual Laid Back Festival in Atlanta.

Greg Thompson, the Principal & Owner of MissingWordSolutions.com, collaborated with Scott’s management team to assist in the media relations work as part of Scott’s run through Georgia. Thompson also conducted a series of podcast interviews with Scott. It was the second podcast series that Thompson had produced with Scott. In December of 2016, Thompson traveled to Muscle Shoals, Ala., to visit with Scott as he was beginning the recording sessions for his album Saving Grace, which is slated for release in 2018. To read the feature story Thompson wrote related to the trip to FAME Studios and to hear the initial podcast series with Scott, please click here.

The second round of interviews Thompson conducted with Scott were recorded at the Allman Brothers Big House Museum in early September of 2017, two days after the official release of Southern Blood. Over the course of the podcast series, Scott takes listeners inside of the recording process for Southern Blood, which was recorded at FAME Studios. Scott also shares the inspiration behind “My Only True Friend,” the Grammy-nominated single from Gregg’s final studio album. The song, which was co-written by Scott, now stands as the final original song written and performed by Gregg Allman.

Highlights of Media Coverage as a Result of PR Effort

Kaedy Kiely from 97.1 The River in Atlanta and Melissa Ruggieri from the Atlanta Journal Constitution interviewed Scott just days prior to the shows in Macon and Atlanta. To listen to the interview please click here.

Melissa Ruggieri also ran a portion of the Q&A with Scott in the Atlanta Journal Constitution. To read Melissa’s story, please click here.

Phil Hudson of the Atlanta Business Chronicle conducted a Q&A with Scott ahead of the Georgia tour dates. To read Phil’s coverage, please click here.

Chelsea Beimfohr from WMAZ-TV in Macon conducted a sit-down interview with Scott on the day of the show in Macon. To watch Chelsea’s report, please click here.