SEVILLE, Ohio – July 24, 2017 – V3 Transportation, an innovator in expedited transportation solutions, is proud to announce the company will be making a donation to the St. Christopher Truckers Relief Fund in honor of Robert Burton, an owner-operator in the V3 fleet. Burton was recently named the Expediter of the Year during the Expedite Expo. Burton donated the $500 that accompanied the inaugural award to the St. Christopher Truckers Relief Fund, which is a charity dedicated to helping truck drivers whose medical problems have led to financial hardship. 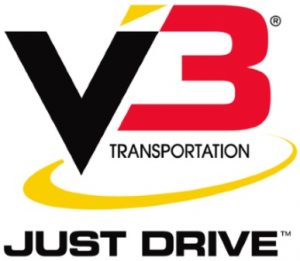 The nomination for the Expediter of the Year was submitted by Christy Burton, Robert’s wife and co-driver. In her submission to the committee, Christy cited the numerous instances since they have been driving together when Robert provided assistance to motorists and truck drivers during their travels. In one situation when the Burtons encountered a burning car filled with oxygen tanks along I-35 in Texas, Robert was able to coordinate a blockade of traffic on both sides of the highway before authorities arrived on scene, keeping people safe from the ensuing explosion of the burning car. 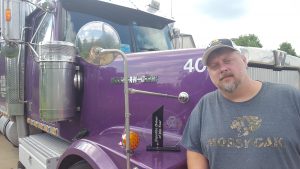 Robert Burton with his Expediter of the Year Award

“I knew I had to nominate Robert because of the human being that he actually is. I just had to do it,” said Christy Burton. “You always hear about the old trucking stories where everybody would help everybody. You just don’t see that a lot today, but Robert still goes above and beyond. There were so many examples where Robert put his foot forward and helped people. He is my husband and I think the world of him. But for the expedite community to feel the same way about my husband that I do touches my heart very deeply.”

Christy Burton did not tell her husband about nominating him for the award until he was named as one of the finalists. The nomination and the subsequent award took Robert by surprise.

“I couldn’t believe it when she told me,” said Robert of the nomination before commenting on the experience of earning the Expediter of the Year honor. “When it first happened, everything in the room disappeared. It was something I never felt before. I’m still in awe and it’s mind-blowing. It’s such a great honor. It’s just an amazing feeling.”

Links To Coverage of Robert’s Story By The Trucking Industry

To read the feature from The Trucker, please click here.

To read the feature coverage from ExpeditersOnline.com, please click here.

To read the story from the Commercial Carrier Journal, please click here.

To read the story from FleetOwner Magazine, please click here.

To read the story from TruckingIndustry.News, please click here.

The Inspiration For Robert’s Donation To St. Christopher’s

Prior to making the trip to the Expedite Expo, Robert and Christy made the decision to donate the $500 cash to the St. Christopher Truckers Relief Fund – if Robert was selected as the winner. The Burtons had been inspired by the mission of the fund, having been out of work following an accident in which their personal vehicle had been struck at a high speed by a motorist.

“We’ve been there,” recalled Robert Burton of the accident that initially kept he and Christy from returning to work. “The wheels weren’t turning on our truck and we weren’t making any money. We were living off a nest egg at the time, and that nest egg was being cooked. This is what St. Christopher’s does. They help people in these situations. In my mind, this was the best thing I could have done with this money – to help someone who was in the situation that we were once in.”

“These surprise donations always make our day,” said Shannon Currier, the Director of Philanthropy and Development with the St. Christopher Truckers Relief Fund. “This shows what a giving spirit that Robert and Christy have, and we are thrilled that V3 chose to support us with their matching donation. They were excited for Robert and they honored him with a donation. That’s the kind of company that we want to work with and that’s the kind of company that drivers want to drive for. It’s just in their heart to give back to the industry and they chose us to do that. It means a lot. It makes us feel that we are giving back to the industry the way that we should – treating drivers the way that we should.”

Robert and Christy Burton shared their story of the nomination, the award and the donation with the Next Mile Podcast from Missing Word Solutions. Through the SoundCloud post below, you can hear the interview with the Burtons as well as interviews with V3 Transportation Chief Operating Officer Paul Ratcliff and Shannon Currier of the St. Christopher Truckers Relief Fund.

Established in 2013, V3 Transportation has rapidly established a reputation for quality and reliability as an expedited transportation service provider for automotive, high-tech and numerous other industries. V3 has been recognized for excellence by national transportation publications in the areas of customer service and fleet operations. Website: v3transportation.com.

The St. Christopher Truckers Development and Relief Fund (SCF) is a 501(c)(3), truck driver charity that helps semi-truck drivers whose medical problems occurring within the last two years have led to financial hardship. The SCF is also working to provide programs that will benefit professional drivers and the trucking industry. The SCF normally does not pay medical bills. The SCF helps semi-truck drivers and their families who have financial needs due to current medical problems. Assistance may be in the form of direct payment to providers for household living expenses, insurance, prescription drugs, and some medical procedures.  The SCF provides all applicants with information on how to negotiate price reductions with medical providers and hospitals. Website: truckersfund.org